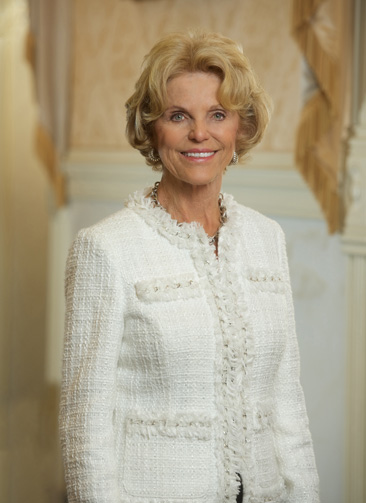 First Lady Peggy McMaster grew up in Spartanburg, South Carolina. Her parents, Thomas Wales McAbee of Roebuck and Mary Rogers McAbee (nee Anderson) of Laurens, encouraged her, her brother, and her two sisters to grow their hearts through service to their church and community.

After graduating from Spartanburg High School, the First Lady attended Spartanburg Junior College for two years. She was employed by United Airlines as a flight attendant when she met Governor McMaster while he was serving as a legislative assistant for the late Senator Strom Thurmond in Washington, D.C. They were married in her home church, First Baptist Spartanburg. The Governor and First Lady began their life together in Columbia, S.C., where she graduated from the University of South Carolina with a degree in business administration and fashion. After graduation, she fulfilled her dream of being a small business owner; opening and operating The Parasol boutique for 17 years.

The First Lady currently serves on the boards of the American Red Cross, Pawmetto Lifeline, and as the Honorary Chair for the Fisher House (SC) Capital Campaign. She is also involved with the SC Attorney General’s Office and the task force to combat human trafficking in South Carolina. She served as president for the Women of the Church of First Presbyterian, Columbia, S.C., and remains active in all aspects of church life including Bible study and Women’s Circle. She served on the boards of Laurel Crest Retirement Community and Sistercare, Inc., and is a current member of the Columbia Garden Club. She frequently spends time serving meals to the homeless at Transitions, and remains active through daily exercise.

The Governor and First Lady have two children, Henry Dargan McMaster, Jr., who married Virginia Roach in August of 2018, and Mary Rogers McMaster who married Sam Herskovitz in March of 2019. The First Family is often seen around South Carolina with their beloved English Bulldog, Mac.