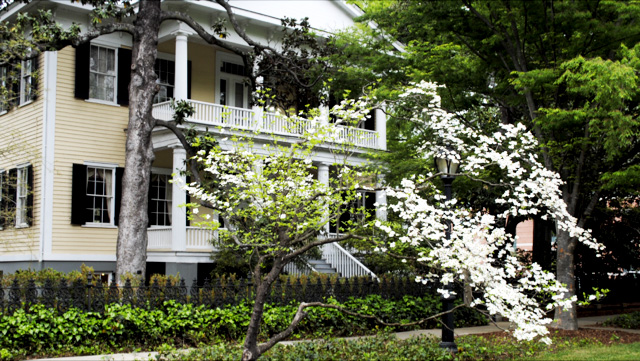 Reminiscent of Columbia's gracious past, the Caldwell-Boylston House with its stately Doric columns, flanks the north side of the Governor's Mansion grounds. Built in 1830 by John Caldwell, a prominent merchant and South Carolina Railroad President, the Greek Revival home was also occupied by Lucy and Caroline Hampton, nieces of General Wade Hampton.

General Daniel H. Chamberlain purchased and resided in the home during his administration (1874-1876). Through personal funding, Governor Chamberlain was responsible for the handsome iron fence that still surrounds a major portion of the grounds. Colonel Albert Lewis of Pennsylvania became the owner for a time before Mrs. Sarah Porter Boylston became its resident for over 50 years. Mrs. Boylston was known for her extensive horticultural expertise and the lovely parties she hosted in her garden. She occupied the house until 1969.

In 1978, during the administration of Governor James B. Edwards, the State purchased the Caldwell- Boylston House from the Richland County Historic Preservation Commission. Governor's Mansion staff and the Welcome Center are presently located in the historic house.